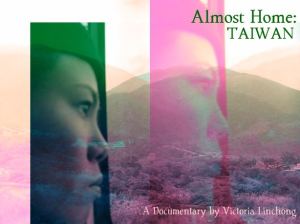 Last year I met Victoria Linchong at the North American Taiwanese Women’s Association (NATWA II) Annual Convention. Victoria is a Taiwanese-American actress, writer, producer and director working in both theater and film. Her feature directorial debut, Almost Home: Taiwan, is currently in post-production. Almost Home was inspired by a 2008 family road trip back to Taiwan. Victoria recently held a successful campaign via Indiegogo where she raised over $5,000 to complete the production of the film. She was also featured in Asian Cinevision’s Cinema Spotlight last December where she discussed her film, as well as her journey as an actor, entrepreneur, and filmmaker. Almost Home: Taiwan is a feature-length documentary that examines the legacy of political repression and the emergence of Taiwanese identity and independence through a family union that takes place after 22 years. In the documentary, Victoria returns to Taiwan with her family searching for long-lost connections. She becomes re-acquainted with the unique culture of the island and its beauty. Bridging the deeply personal and globally political, Almost Home clarifies the controversies surrounding Taiwan, while introducing viewers to Taiwanese culture via raucous night markets, aboriginal festivals, saint trees, and kissing fish.

When I attended the NATWA II Convention last year, I had just returned from reuniting with my birthfamily in Taipei. I knew very little of Taiwan’s history. Victoria helped give me a better understanding of Taiwan’s political past, something you don’t learn about in the textbooks! I look forward to seeing the film and understanding more of Taiwan’s political past and how it’s shaped the country it is now. Currently, Victoria is busy with another production, Big Flower Eater, which she also wrote and stars in. Big Flower Eater is a whimsical collage of folktale, ritual, dance, and historical text that explores the untold history of women in Asia through shamanism in three different cultures: Hmong, Korean, and Taiwanese. It premiered February 7th on stage in New York City. Break a leg, Victoria!

For a snippet of Almost Home: Taiwan, please watch the trailer below:

Please stop by and read Victoria’s interview at Cinevision in full at this link. It’s super interesting! Also visit and like the Almost Home: Taiwan facebook page here.

This site uses Akismet to reduce spam. Learn how your comment data is processed.

Follow Musings of a Taiwanese American Adoptee on WordPress.com