On an impulse last November 11th, I took my daughter and a friend to the Arizona Wing of the Commemorative Air Force Museum in Mesa, also known as Falcon Field. It was, after all, Veterans Day, and I just felt like doing something in memory of my dad. I knew he had a long career in the Air Force and flew a B-something or other during World War II, but didn’t know much else. My dad wasn’t much of a talker; he rarely spoke of the war and only if you asked him. Dad was a tall and slender man, patient, quick with a smile, and loved sharing jokes. He seemed easy-going and cool headed, but I often wonder if there was more going on inside than he let on. Those qualities were probably what made him such a good pilot during all those bombing missions across Europe. I felt closer to my dad than my adoptive mother because of his calm nature, even though we didn’t talk a whole lot. Though he may not have expressed many of his thoughts, I believe he was deep thinker. I worried about him often as a kid, his age and health. My adoptive parents were older when they adopted me. Would he be around when I became a teenager, an adult? I kept all of these worries to myself though. What Dad didn’t express in words, he showed through gifts, things that he thought would make me happy. On my 16th birthday, he surprised me with a car, a little tan Ford Mustang sedan. I loved it. One Christmas, he got me my own phone with my own phone number. It sat on my bed stand, a green landline with the curly cord and push buttons. Mom told me that he was so proud of getting that phone.

I thought about Dad all morning as we rushed to get ready to go to the museum. I didn’t want to miss the landing of a B-17 Flying Fortress called Sentimental Journey, which was on tour across the U.S. Unfortunately, the plane had already landed by the time we got there, but we were able to take a tour inside the plane. This was the closest I’d ever been to an actual World War II aircraft and, in a way, I felt connected to my dad. I was amazed at how confining the inside of the plane was – not too comfortable and very hard to walk around in. The ball turret located under the belly of the plane was an even smaller space. A gunner would sit in this tiny cramped space during combat missions. I imagined what it would have been like in freezing cold high altitude, shooting at the enemy in such tight quarters. Yikes! We continued to look at all the other military aircraft displayed in the hanger. It was an especially meaningful trip to me, as my dad never talked about his military past.

Later that evening, I got online to search, like many times before, for any information about my dad’s military history. Surprisingly, I stumbled across a link containing Dad’s name, Wendell Robert Buck. I immediately clicked on the link, which opened up to a Flickr page where dozens of his photos were displayed from World War II! I was stunned and, at the same time, elated to see so many pictures of my dad as a young man. In many of the pictures he was with others who appeared to be members of his flight crew. I had never seen such pictures before in my life. I went through each one wondering who the other guys were and wondering even more who posted the pictures. I found an email address and sent off a message to the poster inquiring about his connection to the pictures. Edward Valachovic, as it turns out, just happened to be the son of one of the crew members in most of the pictures, the bombardier. His dad, Paul Valachovic, and my dad were apparently very good friends during the war. Most of the pictures were taken in Europe where the crew was stationed at Halesworth, England. Later, I was to learn that Dad was a 2nd Lt. and co-pilot of their B-24 Liberator, which the pilot of the aircraft affectionately named “Rebel Gal.” He was a southern boy from North Carolina, and I thought what a cool name that was for a plane. I noticed a large painting on the side of the plane next to the name, “Rebel Gal,” and came to learn that it was called nose art. The crew flew together with the 489th Bomb Group, 845th Bomb Squadron, 8th Air Force during the European Theatre, January 1944 – August 1944 in 32 combat missions.

Edward referred me to a man who had conducted extensive research on my dad’s service during World War II. I could hardly wait to contact this person and had no idea who he was. He and Edward had corresponded on different occasions exchanging information about the crew of Rebel Gal. Little did I know that this person was a distant relative, Steve Whitby; his mom, Tarri, was my dad’s first cousin. Apparently, Tarri and my dad grew up together in Santa Rosa, California. Once I got in touch with Steve, there was so much to talk about! Steve’s mom had asked him to find out about Dad and his military service after my dad’s death. Steve had provided Edward with the pictures he posted on his Flickr page. Steve was also able to get a hold of of the bombardier’s (Paul Valachovic’s) personal diary during the war and had numerous pictures of my dad during WWII and his training before the war, pictures I’d never seen before. Through Paul’s diary and obtaining Dad’s military service records, he pieced together the story of my dad’s military history, including where he attended flight training and the kinds of planes Dad learned to fly in. Edward, meantime, encouraged me to call his Dad, Paul, who currently lives in upstate New York. What a dear, sweet man! Although his memory was a little patchy, he remembered my dad right away and told me what good buddies they had been. He told me of one particular mission where the crew was flying through some very heavy flak when a piece of shrapnel came through their plane missing my dad’s foot by inches. He laughed and said Dad promised to start going to church with him right after that! Steve continued to send me more pictures of dad during World War II and of his childhood on the farm where he was raised in Santa Rosa. Suddenly many of the missing pieces of my dad’s military history I’d been searching for through the years came together. 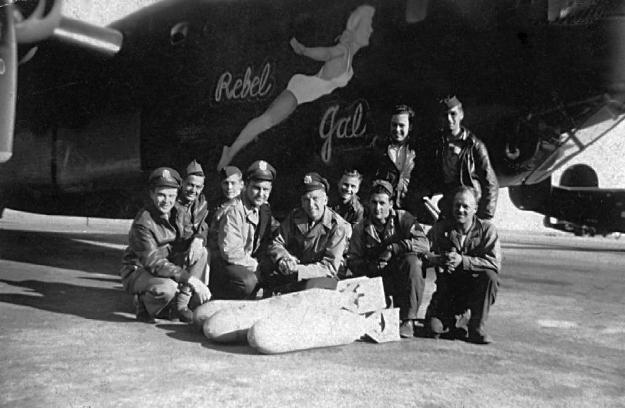 In December 2009 right before Christmas, my family and I headed to Hemet, California where my distant relative, Steve, lives. We stayed with him for an entire weekend looking at old pictures of his mom, Tarri, and my dad and their families together as kids on the farm. Steve gave me a copy of the booklet he put together on my dad. It was more than I could have asked for. The entries from Paul’s diary described the many combat missions the original crew of Rebel Gal flew. This crew and the other crews who flew Rebel Gal later were a very lucky bunch of men. Steve told me that none of the crews who flew her were killed.

I’ve learned so much about my dad over the last several months. In addition to the booklet, Steve also compiled a CD of numerous pictures of Dad and his family. He also got a hold of an 8 mm film Paul had taken during their flight training and reformatted it to CD. The film was dated 1944. What struck me as I watched the CD was how young these men were and how affectionately they goofed around with each other. It was amazing to see my dad in that footage and to witness a time in his life that I knew so little about.

After the war, Dad was recalled back to military service to fly in the Berlin Airlift where he was stationed at Weisbaden AFB. He flew C-54’s from 1948 – 1949 as a pilot transporting much needed food and goods to the starving people of Germany after the war. According to Steve, this was the crowning glory of Dad’s military service, something he was very proud of. Both of my adoptive parents had big and generous hearts. When the airlift ended, Dad decided to stay in the Air Force. He later flew B-29s, B-47s and B-52’s until an aneurysm almost took his life in 1963. Unfortunately, he was never able to fly again after suffering the aneurysm due to physical disability. I know that must have been utterly devastating for my dad because he LOVED to fly. I understand now so clearly why he took me to see the Thunderbirds fly every year at Barksdale Air Force base. He absolutely loved to watch all of those aerial acrobatics. I used to cover my ears in fright as the jets sped overhead, the sound of their engines roaring thunderously through the sky! 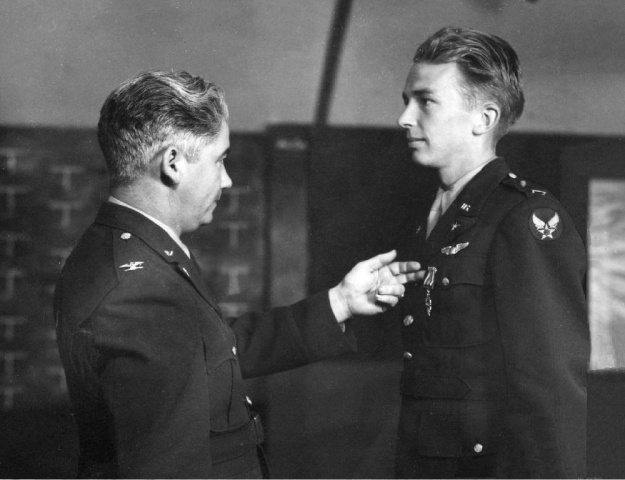 After his tour of duty, Dad received the Distinguished Flying Cross and was cited for his “skill, coolness and courage in combat flight against enemy opposition.” He saved all of his medals and ribbons from the war and the Berlin Airlift in a shadowbox that was prominently displayed in our family room. Dad never bragged or talked about what he’d accomplished. I never knew that my dad was such a hero during World War II. I’m thankful to Steve for providing so much of what I didn’t know about his military history. How I wish I could talk to my dad about all that he did. If he were here now, I’d tell him how very proud I am of him.

4 thoughts on “my adoptive father”

This site uses Akismet to reduce spam. Learn how your comment data is processed.

Follow Musings of a Taiwanese American Adoptee on WordPress.com